Clark County Historical Museum will launch its 2020 Speaker Series on Thursday, Feb. 6, with Frazier Raymond’s presentation of “Buffalo Soldiers in Clark County.” Doors will open at 5 p.m. and the event will begin at 7 p.m.

Raymond is president of the Buffalo Soldiers – Moses Williams Pacific Northwest Chapter, 9th and 10th U.S. Cavalry Association. Raymond enlisted in the U.S. Army Infantry in 1968 and retired in 1990, with the rank of Staff Sergeant. He served in many locations, including Vietnam, Fort Lewis, WA, Europe, and South America.

When the United States entered World War II, it was the first time since the War of 1812 that the United States feared a full-scale enemy invasion.  Across the country, as military bases beefed up their security and war plans, so did civilian governments.  In Portland, Oregon, the city developed and implemented a comprehensive plan to combat enemy attacks, as well as implementing the changes necessary at home to support the war effort abroad.  These plans included the City of Vancouver.

THE CIVILIAN CONSERVATION CORPS IN THE VANCOUVER BARRACKS DISTRICT

When most people think about the Civilian Conservation Corps, or CCC, they imagine thousands of young men carrying shovels, axes, and saws throughout the woodlands of the United States.

While much of the CCC’s work was done in the woods, organizing, training, and supplying the woodland camps was done from locations with access to paved roads, railroads, and rivers.  Places like the Vancouver Barracks, where soldiers played the part of mentors and trainers for the new CCC recruits.  Mr. Matt Mawhirter will talk about the part the Vancouver Barracks and its soldiers played in organizing the CCC in the Pacific Northwest.

BUFFALO SOLDIERS AT THE VANCOUVER BARRACKS

Mr. Wilson Keller, who is working on his Boy Scout Eagle project will talk about an interpretive sign about the Buffalo Soldiers, he is helping design and have installed at the Vancouver Barracks.

Retired U.S. Army Non-Commission Officer Frazier Raymond, will speak about Cathay Williams, the only female Buffalo Soldiers.  Cathay Williams joined the U.S. Army in 1866, posing as a man, named William Cathay.  She and her unit were eventually assigned to New Mexico, where her health declined.  Doctors discovered she was a woman, and discharged her in 1868.  Her story appeared in newspapers in the 1870s, and in 1891, Cathay Williams applied for a disability pension based upon her military service.  Unfortunately, it was denied, and she died shortly afterward. 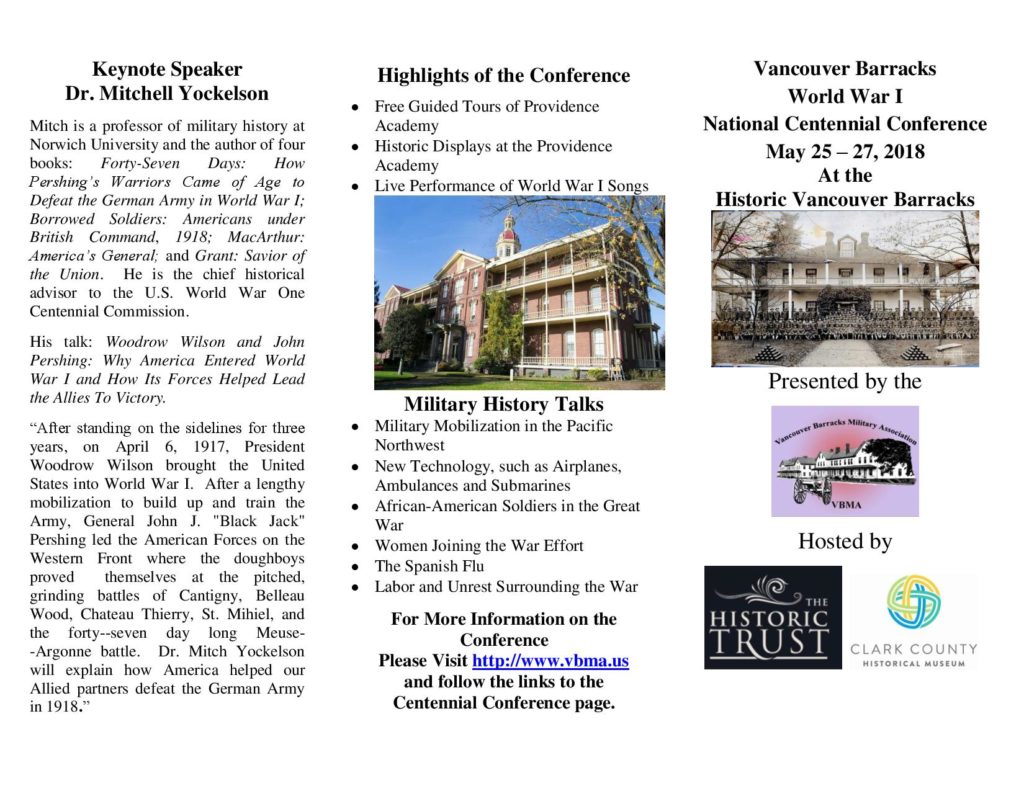 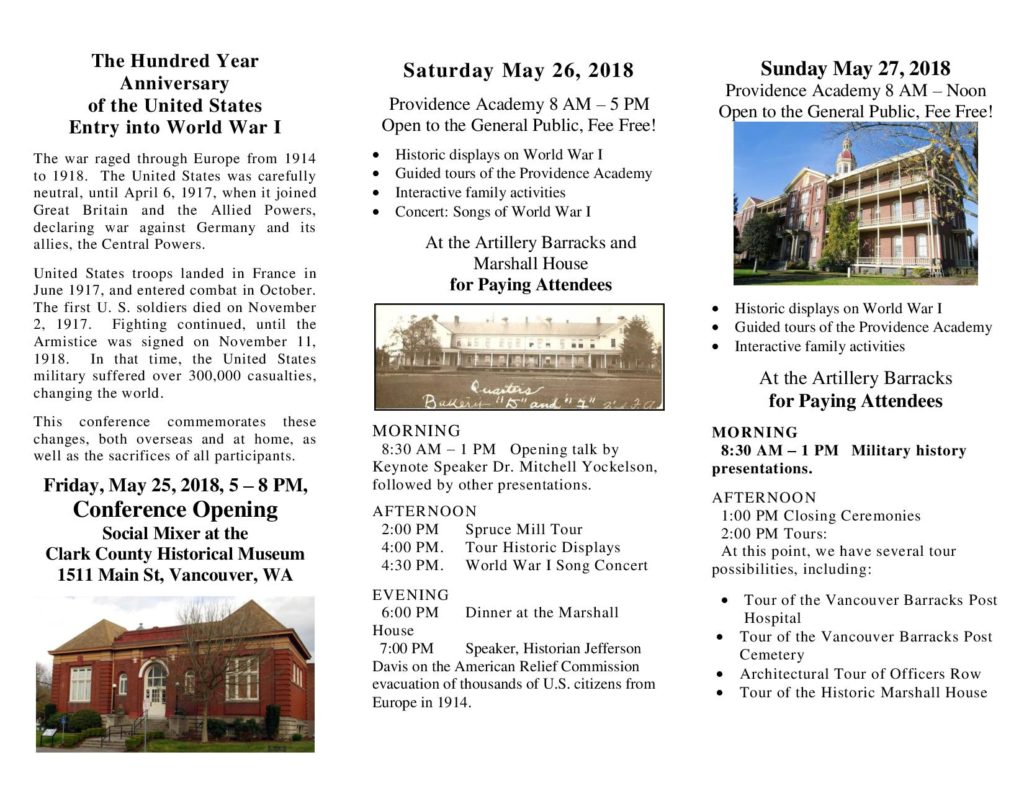 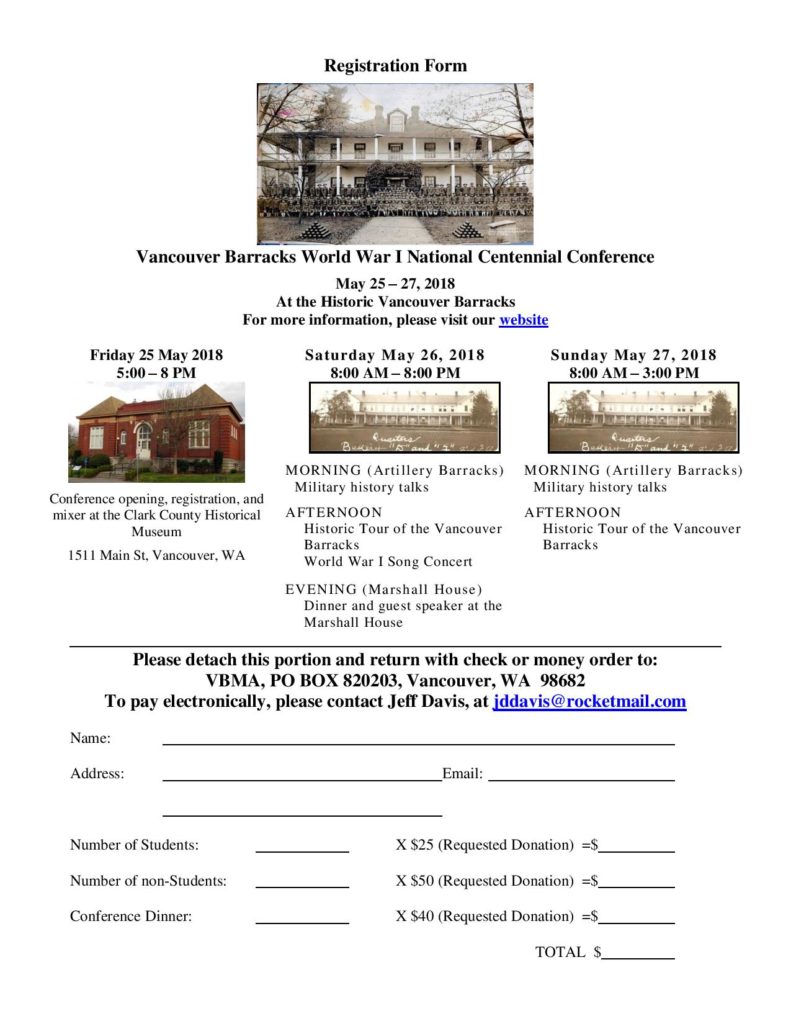 Subject: Most soldiers returning from World War I thought only about their families, and moving on to a rosy future. Unfortunately, many returned bringing death with them, in the form of a pandemic known as the Spanish Flu. This devastating virus killed as many as 50 to 100 million people worldwide.

Several VBMA members would also be happy to give many of the talks they have given in the past, to new groups of interested people. Please email us with your request. Contact VBMA at president@vbma.us.

Subject: Oregon has a rich military heritage from native warriors to settler militias to the National Guard. Before Oregon achieved statehood, its settlers formed their own militia and volunteer units for self-protection. In the years since, Oregon’s citizen soldiers have answered the call of their governor and nation many times. Historian Warren Aney will present an overview of Oregon’s military history, with some emphasis on World War I.

Speaker: Mr. Douglas Auburg
Title: Working on the Railroad with the Doughboys

Subject: Douglas Auburg’s father was drafted into the Army and sent to Europe during World War I. As a bugler and working as a machinist, he served with the 33rd Engineer Regiment from May 1918 to May 1919, at the military railroad service facility located midway between Army Expeditionary Force’s Port of Embarkation in France and the American Front Lines.

Subject: Dan Parshall recounts his father’s experiences as a World War I ambulance driver, based on letters, photographs, and other documents that highlight his career.

From 1932 until 1942, the Civilian Conservation Corps, or CCC was one of the largest public works programs of the New Deal. The program employed single young men to perform unskilled manual labor in jobs related to the conservation and development of natural resources on federal, state and local government lands. About 200,000 African Americans were employed by the CCC. Their story has been largely forgotten. Dr. Donna Sinclair will discuss the work and conditions of these camps, the program’s benefits and drawbacks for African Americans, and the shift from integrated to segregated camps.